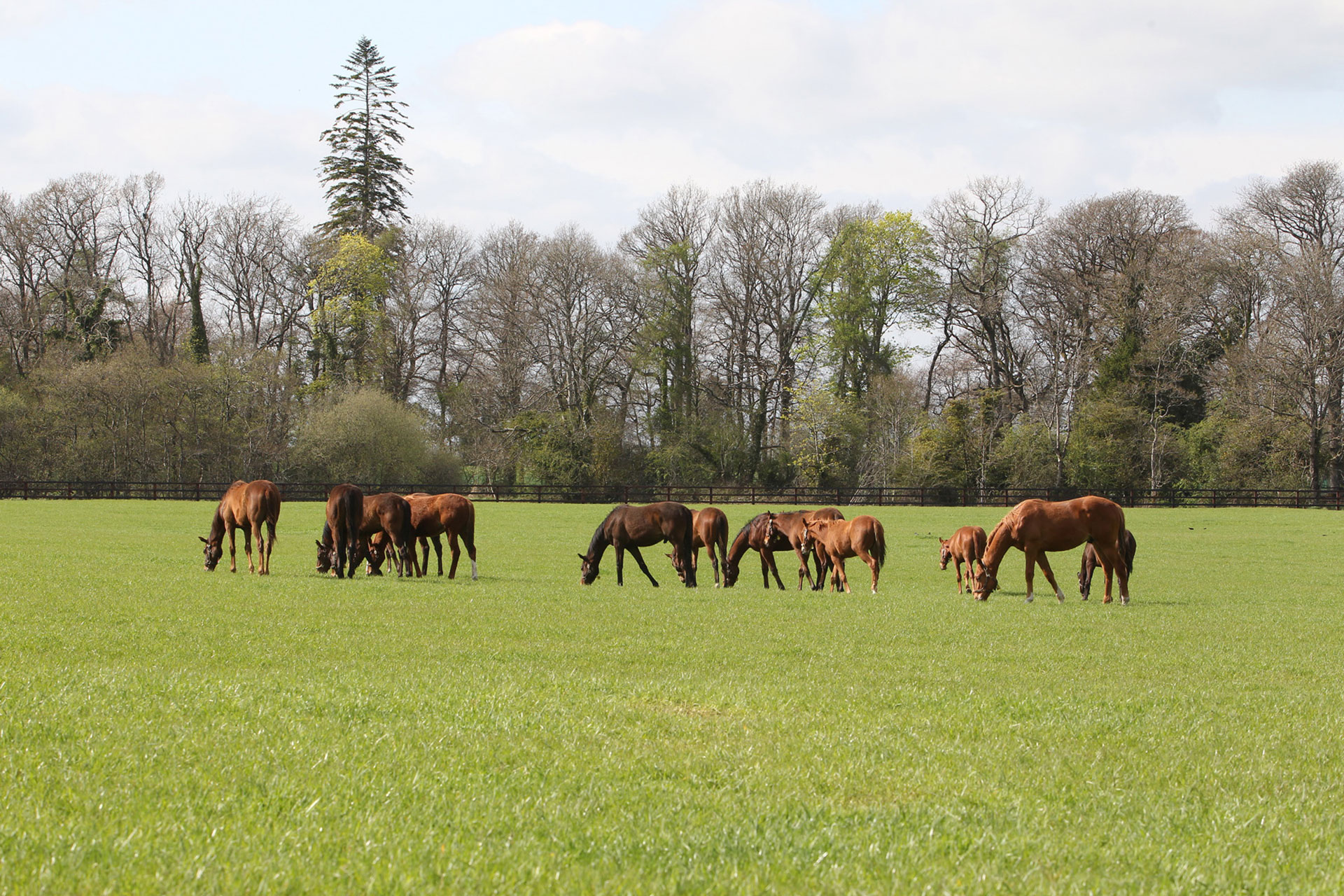 Buying Into The Next Dream

The remarkable appeal of top-class broodmares and breeding prospects illustrated once again the resilience of the bloodstock market in the face of a sustained and unprecedented challenge posed by the global health emergency.

With sales venues and dates returning to their natural homes and positions in the calendar for 2021 having been badly disrupted in 2022, there was certainty and growth at the upper echelons of the market but the increasing chasm between the elites and the majority, which had characterised trade prior to the pandemic was there for all to see plainly in 2021.

The first of the three main European breeding stock sales is the Goffs November one which returned an aggregate that was the sale’s highest in five years, when the Wildenstein dispersal contributed towards total turnover of €20m at the 2016 edition while the 2021 renewal generated €16.2m.

Despite the absence of a headline-grabbing seven figure sale, the sale had real strength and depth to it with almost 40 six-figure sales from a total 370 fillies and mares sold. The star of the show was Plying, dam of Cheveley Park and Sussex Stakes winner Alcohol Free, who was offered in foal to Lope De Vega and was purchased by Yulong Investments for €825,000 from Jossestown Farm.

Riqa a Listed placed daughter of Dubawi, who is already the dam of Group 3 winner Tantheem and is a half-sister to the dam of Irish Derby winner Santiago from the Al Ishq branch of Allegretta’s dynasty, was the only other mare to sell for in excess of half a million. Offered by Derrinstown in foal to Kingman, she made €550,000 to Barronstown Stud.

The second day of the sale recorded its highest price in 15 years when John O’Connor of Ballylinch Stud went to €280,000 for Loyal a daughter of Galileo consigned by Baroda Stud.

At the four-day Tattersalls December Mare Sale, four mares sold for seven-figure sums with an unprecedented 164 fillies and mares making a minimum of 100,000gns. Again the sale was influenced somewhat by the Shadwell dispersal which saw 77 horses sold for a total 5,780,000gns although this was just 9.2 per cent of the 62,412,700gns turnover generated by the sale.

The Shadwell dispersal did however produce the highest-priced lot on the final day of the sale in almost a decade when Adaalah by Oasis Dream brought a winning bid of 82,000gns from Saud Al Qahtani for Prince Faisal Bin Khalid Bin Abdulaziz of Najd Stud.

The second session of the sale returned four seven-figure lots with the most expensive, the Group 3 winner Waldlied, a New Approach three-parts sister to Arc winner Waldgeist. The sale of Newsells Park Stud by the Jacobs family of Gestut Fahrhof to Graham Smith-Bernal precipitated the dispersal of stock belonging to the partnership with Gestut Ammerland which had produced Waldgeist and Waldleid.

Both parties tried to buy Waldlied who was offered in foal to Kingman and it was the Newsells team who got the better of the exchanges, spending 2.2m guineas to keep the mare from the family of Group 1 winners Masked Marvel and Waldpark and a descendant of the brilliant mare Wurftaube.

Waldlied was the most expensive mare sold over the four days and Newsells also consigned the second-highest priced mare, Cayenne Pepper, a four-year-old daughter of Australia who won the Group 2 Blandford Stakes for Jessica Harrington and is inbred 4x3 to the great Allegretta. Cayenne Pepper, who was also placed in the Irish Oaks and twice in the Group 1 Pretty Polly Stakes, was bought by Tom Magnier.

His brother MV Magnier signed for Sunday Times, the dam of Grade 1 Breeders’ Cup Juvenile Fillies’ Turf winner Newspaperofrecord, for 1.8m guineas. The Holy Roman Emperor mare was a Group 3 winner and Group 1-placed herself at two and is also the dam of Listed winner Classical Times. She was consigned by Goldford Stud, carrying a full sibling to Newspaperofrecord.

Japanese interests, which had been strongly active at the Fasig-Tipton and Keeneland mares sales in early November, were also an influential presence in this market. Representatives of Katsumi Yoshida bought the Listed Ripon Trophy winner and Group 1 Cheveley Park Stakes runner-up Flotus for one million guineas. He also purchased the Group 2 Duchess of Cambridge Stakes winner Dandalla for 750,000gns and Eden Quay, the full sister to Group 1 winner Ten Sovereigns, and Cosmpolitan Queen, the Dubawi full sister to Group 1 winner Arabian Queen were also amongst his purchases.

The turnover for the four days was 45 per cent higher than the previous year and a slight increase of just under eight per cent from the 2019 aggregate. Both the average and median dipped from those recorded in 2019, eight points in the case of the average of 79,204gns and 3.4 per cent for the median which rested at 26,000gns.

On an extraordinary December Saturday evening in Deauville, records were smashed during the opening session of the Arqana December Breeding Stock sale including the highest price ever for a horse sold by the company.

It was indicative of how seldom elite broodmare prospects come on the market that five such talented fillies, created a bidding frenzy which drove the session’s statistics towards the stratosphere and accounted for 77 per cent of the entire sale’s turnover.

That record price of €3m was brought by the Group 1 Prix de l’Opera heroine Rougir, the first Group 1 winner from the first crop of Territories. The three-year-old filly was sold by Sumbe for the Chehboub family’s Haras de la Gousserie to Michel Zerolo of Oceanic Bloodstock, who was acting on behalf of MV Magnier and Michael Tabor of Coolmore and Peter Brant of White Birch Farm.

Rougir had beaten Grand Glory by a nose in the Longchamp Group 1 and that daughter of Olympic Glory was second to her again at the sales, bringing €2.5m from Yohea. Successful in the Group 1 Prix Jean Romanet, the five-year-old was sold by Haras de Castillion and, similarly to Rougir, could remain in training before embarking on her broodmare career.

The dissolution of the partnership between Newsells Park Stud and Ammerland in the family of Waldgeist, which had lit up the Tattersalls ring days previously, provided another highlight at Arqana where it was Ammerland who emerged successful on this occasion, buying Wildfeder, a Galileo full sister to the Arc winner for €2.05m.

Purplepay, a Group 1-placed filly from the first crop of Zarak, was the first horse of the session to make €2m when selling to NBB Racing for exactly that figure. The juvenile will continue her racing career in America, having been purchased on behalf of Lael Stables.

Speak Of The Devil, second in the Group 1 Poule d’Essai des Pouliches, was another purchase from the sale who will be plying her trade in the States from now on, the Wootton Bassett mare having been purchased for €1.95m by Michel Zerolo for Peter Brant.

The average price for the Arqana December Breeding Stock Sale was also a record at €60,314 which grew by a similar level to the turnover, at 22 per cent. However, the median, which is probably a more accurate reflection of the state of play across the market as a whole, decreased by 22 per cent on 2019 to €15,000. As for the clearance rate, it was in line with 2019 also at 76 per cent.